Eye for an Eye 4E conversion 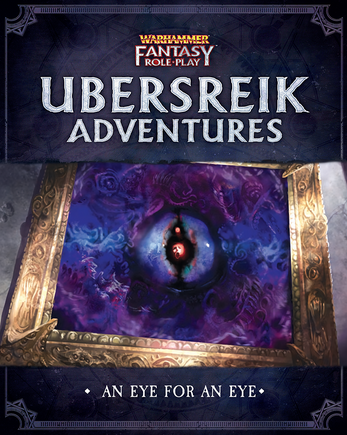 I've also made a short video for my online group at https://anchor.fm/peril/episodes/Bonus- ... /a-a29ctgo
Verdant Castellan of Bretonnia and Purveyor of the Perilous Realm Podcast

Thanks skerrigan, I've grabbed a copy and will read it over properly when I get the chance (which is seemingly all the time right now).

Any reason for using the Ubersreik template for it?
Top

It starts in Ubersreik, and it let me nerd out my DTP skills. I did think about releasing an Old World Adventures variant cover as it is an old adventure and that line has been neglected by C7.
Verdant Castellan of Bretonnia and Purveyor of the Perilous Realm Podcast

Did you use a template to design it? In InDesign or Publisher, perhaps? If so, I'd really appreciate cribbing it, as I have two fan supplements I want to layout.
Top

good, the only things worth dealing with in that edition in my experience were the meat of the adventures themselves so i'm glad people are converting them forward.
Top

adambeyoncelowe wrote: ↑
Mon May 25, 2020 1:35 pm
Did you use a template to design it? In InDesign or Publisher, perhaps? If so, I'd really appreciate cribbing it, as I have two fan supplements I want to layout.

skerrigan wrote: ↑
Mon May 25, 2020 12:31 pm
It starts in Ubersreik, and it let me nerd out my DTP skills. I did think about releasing an Old World Adventures variant cover as it is an old adventure and that line has been neglected by C7.

Visually it looks very good - I've still not read through the scenario yet, so no comment on that.
Top

Thanks for the conversion. I only had a quick glance on it and it looks really good.

I would have loved for it to be completely converted to 2512 IC and not possibly risking changes in an NPC that might play a role in the updated Enemy Within campaign. But that's just very lazy and nitpicky on my behalf.

But one thing I would love to mention and that's a gripe I have with a lot of official adventures as well (and also in most other systems I know of): Would it be possible to provide two sets of maps/layouts/battlemaps? One for the SL and one for the players? I never really got why I get beautiful maps as a SL which I then cannot directly use for play, because they contain major spoilers for the players.
Top

I don't think Aschaffenberg will pop up in the Enemy Within, but who knows. Andreas von Bruner is all over the Ubersreik Sourcebook though.

I even made a github repository for the module at https://github.com/CStuartEKerrigan/WFR ... od-4e-FVTT for Foundry VTT.

I'll put these links on the contents page of the next version as i get asked for spoiler free mps at lot.
Verdant Castellan of Bretonnia and Purveyor of the Perilous Realm Podcast

Thank you for the beautifully done conversion and the excellent player maps that go with it. The latter actually saved the day today: I am running the adventure for a very novice and rather young group of players, who bumbled their way through the day without picking up on a single one of the various clues. But they *did* spot on the map and decided to have a closer look after dinner. Without that, I think , which hopefully will be played out next week.

Thanks once more (also for the playthrough on your podcast, which I enjoyed very much).
Top

Why do you think C7 haven't done more of this themselves? They own the rights to all the 3rd edition stuff, don't they? I'm surprised, is all. If there's one set of products that most grognards don't own (and would therefore buy), it's 3rd edition adventures. I like most of those that I've read.
Top

They have published a part of the Edge of Night (as "Lords of Ubersreik" in Rough Nights and Hard Days). It is said they might, perhaps, also publish parts of The Enemy Within in The Horned Rat, Empire in Ruins or in their companions...

Beyond that, I don't know. They seem to use WFRP3's Ubersreik back-plot in WFRP4's Ubersreik Adventures. Perhaps that they'll publish WFRP3 adventure later, as they are set between 2515 IC and 2522 IC and constitute a bridge between the Elder Enemy Within campaign by Games Workshop and Hogshead Publishing (set in 2512 IC-2513 IC) and the New Enemy Within campaign by Fantasy Flight Games (set in 2522 IC, during the Storm of Chaos), while the current publications are still for 2512 IC...?
For example, Eye for an Eye adventure is set in 2520 IC at the earliest (probably in 2021 IC) and is the first adventure set in Ubersreik by WFRP3 publications. It was introduced by A Day Later a Shilling Short.


(Or perhaps that they, more simply, do not own full rights for WFRP3...)
Last edited by Capitaneus Fractus on Fri Oct 30, 2020 6:38 am, edited 3 times in total.
Veniam, Duelli Malleum, phantasticum ludum personae uidebo, in fera terra periculosorum aduenturorum ludebam.
Top

Glad you enjoyed this. It was a lot of fun to make and to play through. Weirdly Edge of Night has an entire chapter that is not included in Lords of Ubersreik which ties into the Vermintide computer games (or more likely they tied into it). Speaking of which, Grunewald Lodge also appears in both Vermintide 1 and 2 - although it's pretty clear Fat Shark's playthrough didn't go quite as well as ours.

Oh and I did another one of these, and man was it a lot more work. 3E had another adventure set in Ubersreik, Mirror of Desire (I think Edge of Night, Mirror of Desire and Eye for an Eye were really it for Ubersreik in 3E). You can download it free at https://perilousrealm.itch.io/mirror and I hope you enjoy it. I plan on bookending my run of the Ubersreik Adventures with it, so it's written for higher XP characters than Eye, though it's pretty easy to scale. 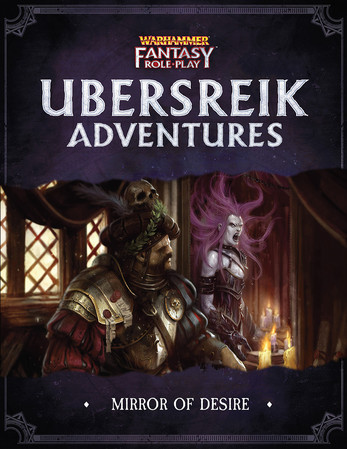 
Something is awry among the Ubersreik nobility. A minor nobleman’s daughter, has bewitched the town’s noble sons and is beset by suitors for her hand. The situation has perplexed the town’s nobility because Esmeralda is an average girl with little wealth to her name and has long been passed over for a match. Determined to set their young men right and dispel this pointless infatuation, the patriarchs of the noble families call upon outside assistance...


This is a fairly substantial rework of the original 3rd Edition adventure Mirror of Desire from the 3rd Edition boxed set Lure of Power. This is a complete social adventure, taking place within the city of Ubersreik.

All mechanics are updated for Cubicle 7's Warhammer Fantasy Roleplay 4th Edition, and it does not require any components to play beyond the WFRP4e core rulebook.
Verdant Castellan of Bretonnia and Purveyor of the Perilous Realm Podcast

They must have the rights, if they already published something else from Edge of Night. The timeline is virtually irrelevant as far as I can see, as I'm not aware the Storm of Chaos (or any other event) makes a big difference to any of the adventures.

It remains an absolute mystery to me why they have published in pdf form much 1st and 2nd edition material, but only adapted part of a single 3rd edition adventure.
Top

One reason might be that you can use 1e and 2e modules more easily in 4e.
3e modules probably need to be reworked.
Top

C7 do own the rights to 3e material, and apparently there is interest from the design team in making it all available in pdf format (i.e. as previously published by FFG, not updated to 4e). But, unsurprisingly, they don't have the time or people-power to do that at the moment on top of what they're trying to do for 4e.

I think if they did convert the 3e material to 4e it would make sense to leave them as is in terms of timeline. While they are meant to take place c.2520-2522, The Enemy Within is the only adventure that specifies a year (and even that is only mentioned on the calendar). Really, they're all vague enough as to wider goings-on in The Empire that they can be put anywhere in the timeline, as shown by C7 converting (part of) The Edge of Night with only minimal changes to the non-mechanical elements.* One of the nice things about the 3e adventures is that they're fairly rules-light anyway. And the good thing about TEW is that it can build up to either the Storm of Chaos or the End Times (or neither) depending on your preference.

*Technically, if you take everything published as canon, there have been two masked balls in Ubersreik hosted by Holzenauer's in the space of ten years that were Now that's unlucky!
Top

sounds like the Holzenauers might have some nefarious dealings to keep themselves on top of things to me.....
Top

Ha! Anything is possible when it comes to Imperial nobility after all.
Top

Karanthir wrote: ↑
Mon Nov 02, 2020 3:46 am
C7 do own the rights to 3e material, and apparently there is interest from the design team in making it all available in pdf format (i.e. as previously published by FFG, not updated to 4e). But, unsurprisingly, they don't have the time or people-power to do that at the moment on top of what they're trying to do for 4e.

That seems very odd to me - turning down an instant revenue stream. They should just employ skerrigan to do it for them!
Top

Maybe given the general response to 3e among large parts of the community they just don't see it as a particularly worthwhile revenue stream, so not a priority.
Top
Post Reply
40 posts