Being an attempt to play through the WFRP 2E Campaign The Thousand Thrones with the various Liber Fanatica expansions and slight reworkings of the scenarios to make player agency a little more apparent.

In the latest episode our heroes are exploring the Doodkanal looking for a reprobate called Jurgen Baer. Their search takes them from the seedy taverns and dens to the submerged sewers of the port city.
You can listen here or on any other good podcast platforms.
Verdant Castellan of Bretonnia and Purveyor of the Perilous Realm Podcast

In this week's episode we finish Chapter One of this gargantuan campaign as our exploration of Marienburg ends in the Thousand Thrones. First though our trio of heroes must face the remnants of the Three Moons Cult in the sewers and make sense of all the clues they have found so far about the Crusade of the Child.

One of these questions will be answered:-

You can listen here or on any other good podcast platforms.

Coming next time - a discussion of Chapter 1 in the campaign from the player's perspective, and then the first session of our very own host Chuck's piece "An Unquiet Place", which certainly lives up to its name in the first 5 minutes alone.

This week we move on to Chuck's opus/regret the Unquiet Place.

Available where all good podcasts are distributed, and probably where several dodgy ones like this are too.

The Companions of the Tattered Cloak leave Marienburg and wind their way along the banks of the River Reik towards the village of Pfeifeldorf, to carry out Lady Selena Reiva's errand and to pursue the Crusade of the Child. Under the eaves of the Drakwald they encounter danger and must fight for their lives.

All in this week's episode.
Verdant Castellan of Bretonnia and Purveyor of the Perilous Realm Podcast

"An Unquiet Place" would have made a better title! Wish I'd thought of it.
Top

That was a typo but yes Unquiet Place does seem apt.

Pleased to report the group enjoyed the adventure. We burn through it in 2 parts, with a third extra part with subplots keeping the PCs in Pfeifeldorf.
Verdant Castellan of Bretonnia and Purveyor of the Perilous Realm Podcast


They might be the first! I'll give it a listen on my commute tomorrow.
Top

Loving it so far. My favorite part is when they discover in the middle of the forest that they forgot to bring a map.

EDIT: Your portrayal of Wendell was spot on, and hilarious.

Player: "I'm sorry for slapping you."
Wendell: "No no, you were quite right. I would have slapped me too!"
Top

I think it's fair to say my players enjoyed Chapter 2 way more than Chapter 1.

Way back in Episode 2 they had a similar problem to the map problem - they didn't have any rope and only realised this half way up a climb. The resultant noise of them knocking rubble over was enough to alert every cultist in the area and the combat was... challenging.

As for the Wendell incident - that player's my girlfriend, and she got a little upset. She's new to RPGs and I thought I was going to be sleeping on the floor that night

as the other PCs got her thinking she was going to get hung for slapping Wendell, and that it was down to the fact she was a woman. I dialed his patheticness up to 11 to make the scene amusing for everyone.

By the end of Episode 2 Wendel is the senior-most surviving member of the Blauesblut - and with the PCs they are planning to go north to track down the Strigoi lair (this was something suggested in one of the unpublished Expansions - a sandbox of around Pfeifeldorf, and it gives the PCs a little more agency - they could've gone off to the next part of the campaign but they all like Pfeifeldorf and its quirky inhabitants).

Will Wendel be up to the rigors of command?

skerrigan wrote: ↑
Fri Feb 22, 2019 3:03 am
As for the Wendell incident - that player's my girlfriend, and she got a little upset. She's new to RPGs and I thought I was going to be sleeping on the floor that night

as the other PCs got her thinking she was going to get hung for slapping Wendell, and that it was down to the fact she was a woman. I dialed his patheticness up to 11 to make the scene amusing for everyone.


Yes, it was clear during that part you were treading in very dangerous waters. Nicely solved.

You mentioned the phonetic spelling for Arouet’s speech -- my original draft had just the plain English words, stolen from Voltaire. Any accents or phonetic "French" spellings were added during the editing phase, I guess to spice things up?

I have about 30 minutes to go and I have to say, kudos on your gamemastering skills and kudos to your group for being so willing to follow all these threads to their conclusion. It was very enjoyable listening, and I can't wait to hear the finish.
Top

Part 2 of the Unquiet Place in our Thousand Thrones playthrough is available where all eggs-cellent podcasts are distributed.

In their quest to find the missing chicken, Gertie, our heroes discover that while talk is cheep, fowl corruption goes all the way to the top of Pfeifeldorf's society, Will their hendurance be enough to see them through? Will they face the creature in the crypt, or will they themselves turn chicken?

This will be a 4 part chapter after all, as this session was 5 hrs in total - so you're getting the first 2 hours or so this week. This leads to quite a nice cliffhanger, and the last 2 minutes of this podcast I'm especially amused by.

Never mind the podcast (which I'm sure I'll enjoy), I'm nominating that for forum post of the year! Truly puntastic!
Top

Part 3 of the Unquiet Place in our Thousand Thrones is one that has quite a lot of bite to it. Available where all podcast are found, even those that suck...

Our heroes continue to stick their necks out to aid the people of Pfeifeldorf. You can Count on a deadly combat, in the vein of their previous efforts. Things get grave as the vampiric undead assail our heroes, and the stakes could not be higher. (Also
apologies for any coffin... coughing in the audio)

.A showdown occurs with on one side the companions, their new allies in the Blauesblut and on the other the foul Hollenbach and his summonings. Will the arrival of a third party complicate things? Will the vile Lennhart von Speier be saved, despite his many sins? What of those of his brother?

With added vampire sound effects. Fangs for any feedback!
Verdant Castellan of Bretonnia and Purveyor of the Perilous Realm Podcast

Finished this last week. Congratulations to your players and to your GMing skills. All things considered, that was probably the best outcome that the scenario could hope for. Well done.
Top

Thanks. It was a fun scenario and I was looking forward to running it for a few years now. There's another session of metaplot and PC baiting in Pfeifeldorf and then I'm looking forward to the Reapers Bounty.
Verdant Castellan of Bretonnia and Purveyor of the Perilous Realm Podcast

We're back! We have the last part of our Chapter 2 playthrough, where the Company of the Tattered Cloak deal with the fallout from the attack on Pfeifeldorf. There's even a cool map to download in the link below for GM's only.

Listen in now where all podcasts can be found, and here as well.

Loosely based on the unpublished Expansion material for the Thousand Thrones this session deals with some unresolved plot-threads and throws some foreshadowing of future events that will soon shape the campaign. The Company of the Tattered Cloak join forces with the Blausblut and strike forth to Pfeifeldorf's hinterlands in search of answers. Instead they find madness, disease and corruption that seeks to turn the very land against them.
Subsequent episodes will include downloads relevant to the campaign again for now download the map of Pfeifeldorf's environs that Wendell Ott uses (minus the GM notes) in the opening scenes of this episode. 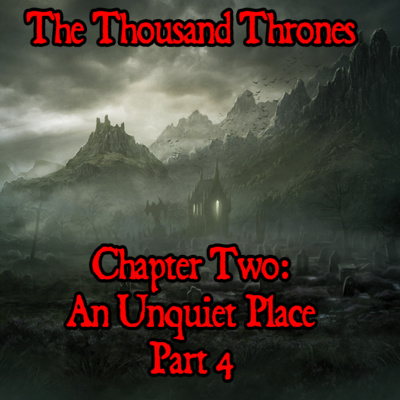 We may have not been posting, but we have been playing... (we're well into Chapter 4 IRL).
Verdant Castellan of Bretonnia and Purveyor of the Perilous Realm Podcast

Once more we release an episode into the void where, hopefully, someone is listening where all podcasts can be found, and here as well.

Having sought sanctuary from the deprivation of the Drakwald within the walls of the Reaper's Bounty our companions three are surprised to discover everyone has seemingly left the inn deserted. Or perhaps not as deserted as they might have liked...
Resource Download:

This episode was played on tabletop with an A1 map of the Reaper's Bounty. This map is available as a download in PDF format. Use it in good health, and if you do use it let us know!
Verdant Castellan of Bretonnia and Purveyor of the Perilous Realm Podcast